Pat Hairston remembers exactly when she knew what she wanted to do for the rest of her life. She was volunteering for Canines For Service in 2002. That’s when she met a man training with his first service dog.

“He said he had a great evening with his service dog, and that he had fallen,” Hairston said. “Usually our hearts go into our throat when we hear that. But he said the dog almost immediately got him back into bed. He said that it usually took him two hours to get up after a fall on his own.”

Such stories are the norm at Canines For Service. Based in Wilmington, North Carolina, CFS pairs those in need with service dogs. Hairston and her husband, Rick, work to rescue former shelter dogs. Then CFS retrains those same dogs as highly attentive and accommodating service animals.

Hairston describes how service dogs aren’t magic cure-alls for her clients’ lives, “but it may be better in some small way. They’re able to go to their child’s soccer game, or to the grocery story, or out to dinner with their wife.”

At first glance, the story sounds made for Hollywood, happy endings and all. But the reality of America’s perception of service dogs is much murkier. For one, there’s increasing scrutiny in Washington, D.C., about whether they have any tangible effect for individuals with post-traumatic stress disorder (they do). But another factor, just as dangerous, is the growing number of service dog “impostors.”

“In recent years, there’s been such a high rate of fakes,” Hairston said. “They purchase fake IDs and [service dog identification] vests to bring their dogs wherever they go. These dogs are usually ill-trained and sometimes behave aggressively to other dogs. The person on the other end of the leash doesn’t have any control.”

Because of the Americans With Disabilities Act of 1990, someone with a service animal usually cannot be turned away from a business or public place. The caveat is that the ADA doesn’t require service animal identification. Despite these public qualms, CFS goes out of its way to educate local businesses about the legal aspects behind service animals.

“We can’t do it on a grand scale, but we can do what needs to be done,” Hairston said. “This is truly a 24/7 business. You don’t step away from it easily. Something is constantly going on.”

“Once Bethany and the foundation team were here and filming, you could breathe a sigh of relief.”

In turn, once we learned more about CFS, we leaped at the opportunity to help tell it to a wider audience.​

“The word ‘home’ can mean different things to different people,” said Shirin Zohdi, the Click & Pledge Foundation’s CEO. “While our first thought is often of a physical location, a home can be much more than simply four walls, a roof and a warm bed. For wounded veterans who are often battling traumatic memories and unease in their own homes, and the frightened and abandoned animals waiting in shelters for an uncertain fate, ‘home’ can mean a second chance at life.”

For Bethany Teague — our in-house Storyteller, director, and North Carolina native — the most important component to the foundation is yielding a story with tangible results.

That critical component was enough evidence for us to partner with Canines For Service. We worked together with CFS to create a documentary titled “Project Home: The Next Battle.” Filmed in North Carolina and Virginia, “Project Home: The Next Battle” details Canines For Service’s work, and how the nonprofit helped change three veterans’ and their service dogs’ lives.

Telling Our Own “Untold Story”

Most people don’t know what goes behind the making of a documentary. In truth, it’s far from the world of “lights, camera, action.” While we set out to tell the stories of our Causes, we also started to write about our own experiences filming far away from home. We call it “Road Journal.”

Go Behind The Lens & Read Our Road Journal 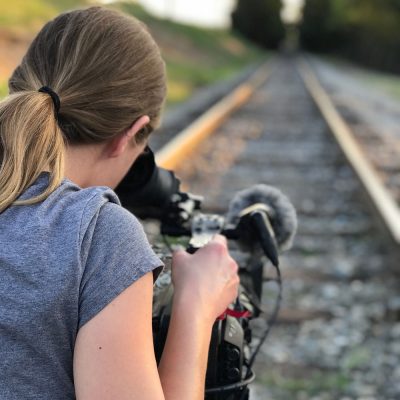 Because of the topic’s sensitivity, both parties took a considerable amount of care when determining who to interview. Rather than focusing on one disability, Teague chose to focus on the spectrum of Canines For Service’s clients. “The Next Battle” details how service dogs could — and have — helped those with PTSD, war-related injuries, or both.

“The array shows how versatile the dogs can be,” Teague said. “It wouldn’t have done Canines For Service or the dogs as much justice if we had been too narrow in our approach.”

As with any form of publicity, Hairston was skeptical at first of how the film crew would receive CFS and tell its story. Her mind was quickly put to ease once filming began.

“Once Bethany and the foundation team were here and filming, you could breathe a sigh of relief,” Hairston said.

We launched the teaser trailer for “Project Home: The Next Battle” in January 2018. Since then, we’ve helped Canines For Service tell its story around the globe. Collaborating with CFS to create a distribution plan for the documentary, the Click & Pledge Foundation brought awareness to its cause by opening new viewers’ minds to a prevalent issue.

“What ‘The Next Battle’ showed to our supporters was the depth of change in an individual’s life because of the dog we provided. The Click & Pledge Foundation really went above and beyond our expectations.”

To date, “The Next Battle” has been selected by five film festivals worldwide. Some of those selections include the UK Monthly Film Festival, the 2018 Over-The-Rhine International Film Festival, and winning “Best Family Film” at North Carolina’s own Cape Fear Independent Film Festival.

“Because we’re partnering with organizations whose visibility may be limited to their local communities, what we discovered is that there has to be a plan in place to expand their audience and to get it in front of people who wouldn’t normally see what they’re doing,” Teague said. “The film festivals are a great way of exposing the organization to a new audience, and a great way to give credibility to that work. So, when they do take the documentary in front of people during fundraisers or events, it’s a more legitimate tool for them.”

In August 2018, Teague and the foundation crew traveled to Lake Gaston, NC — one of “The Next Battle”‘s filming locations — to promote the documentary. There, she met another veteran who also used a service dog, and her husband. Their reaction — the very reason why the Click & Pledge Foundation creates these documentaries — was overwhelming.

“She started to tear up a little bit, because they were so grateful I took the time to tell their story and share it with the world. Those are the moments where I feel like we’ve done something really successful and worthwhile.”

On Canines For Service’s end, the nonprofit noticed an uptick in awareness and increased engagement. More individuals are asking about its programs, many of whom aren’t from North Carolina.

“What ‘The Next Battle’ showed to our supporters was the depth of change in an individual’s life because of the dog we provided,” Hairston said. “The Click & Pledge Foundation really went above and beyond our expectations.”