How do community foundations help local nonprofits raise money and work toward sustainability?

They encourage their community to GiveBig.

GiveBig, Click & Pledge’s social fundraising platform, allows multi-location charitable organizations (like community foundations) to leverage the power of “giving days” to raise funds for various nonprofits. GiveBig provides a central website through which multiple nonprofits that are connected regionally, nationally, or by some similar can set up individual fundraising pages, process donations, and even encourage their donors to set up individual peer-to-peer giving pages. To add more flair, they can stream videos and live updates including donor comments and donation amounts. Since its inception in 2011, GiveBig has helped 7,800 organizations raise a total of $55 million from 636, 215 donors.

Near Click & Pledge’s headquarters in Southwest Virginia, two local community foundations—The Community Foundation for the New River Valley (CFNRV) and Foundation for Roanoke Valley (FRV)—have relied on the GiveBig platform to power their giving days, and they couldn’t be happier.

The Community Foundation For The New River Valley

“Helping nonprofits with fundraising is something that’s always been a little difficult to do. How do we choose which organizations to promote? How do we help without spreading ourselves too thin?” — Jessica Wirgau, Executive Director of The Community Foundation for the New River Valley (CFNRV)

“Helping nonprofits with fundraising is something that’s always been a little difficult to do,” explains Wirgau. “How do we choose which organizations to promote? How do we help without spreading ourselves too thin?”

In search of an answer to these questions, Wirgau sought out a giving platform they could use for a 24-hour fundraising event. Wirgau needed a platform that was easy to launch, allowed for individual giving pages for each nonprofit, and funneled money directly to the nonprofits (instead of requiring the foundation to manage donations). She also wanted something that was reliable and provided good access to support. But she soon discovered that many of the giving platform options didn’t meet her criteria. 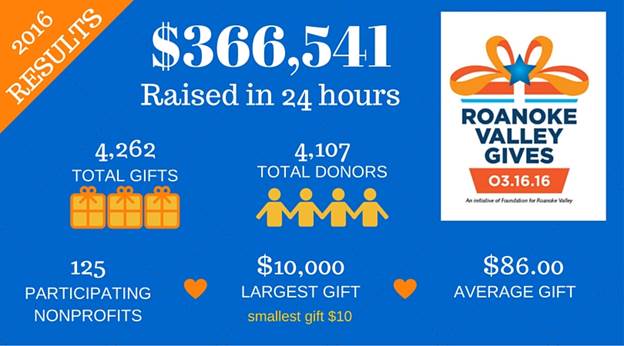 “GiveBig was the perfect solution,” says Wirgau. “What we were able to do with GiveBig was bring a tool to the table that we could set up and promote, but it would be the responsibility of the individual nonprofits to use the tool for their own benefit.” The CFNRV launched the first GiveBigNRV that same year, and it has grown each year since. In 2014, GiveBigNRV collected $39,863 for 67 causes. In 2016, that number grew exponentially to $217,885 for 88 causes—an impressive amount for a relatively small geographic location.

While these numbers were encouraging, what was most interesting for Wirgau was the number of new donors they were able to find via GiveBigNRV.

“Before GiveBigNRV, we had this feeling that we weren’t tapping into a set of donors, particularly younger ones, who are giving online and in small amounts,” explains Wirgau. “GiveBigNRV was a way to help folks identify another path for fundraising that they didn’t have access to before.”

“One smaller nonprofit in particular told us that Roanoke Valley Gives was a game-changer for them; they raised $4,000—more than they had raised at any other time.” — Carly Oliver, Associate Director of Foundation for Roanoke Valley

Two years after CFNRV’s first GiveBig day, Carly Oliver, Associate Director of Foundation for Roanoke Valley, approached Click & Pledge about the GiveBig platform. She had also researched many giving platforms and hit the same obstacles Wirgau had: most of them were expensive, charged each nonprofit a fee to participate, or required the foundation to receive all the donations before funneling them back out to nonprofits. She had been aware of CFNRV’s similar efforts and sought Jessica’s insights on how well Click & Pledge’s GiveBig platform worked for them.

“I had been interested in implementing a giving day for a while,” says Oliver. “We were trying to provide an opportunity for nonprofits to raise awareness about their organizations and a platform where we could collectively raise unrestricted funds for the nonprofit community.”

After talking with Wirgau, Oliver felt that GiveBig seemed like the perfect solution to help these organizations gain more visibility and raise funds.

“For many of these organizations, $2,700 was a huge boon,” says Oliver. “One smaller nonprofit in particular told us that Roanoke Valley Gives was a game-changer for them; they raised $4,000—more than they had raised at any other time.” Oliver noted that the GiveBig platform was especially helpful for nonprofits that don’t have a large (or any) marketing department. Because GiveBig is marketed by the foundation, many of these smaller nonprofits gained visibility and were able to draw in more donors and raise more money than they had in the past. In addition, the nonprofits didn’t have to wait a long time for funds—all funds processed through the GiveBig platform were deposited directly into their respective bank accounts within 48 business hours.

GiveBig also demonstrates the power of giving in community. “What’s great about GiveBig is it multiplies gifts of any size. It allows folks who are passionate about a particular cause to contribute and feel like they’re part of something bigger,” explains Oliver. “Their $10 donation goes a really long way.”

The Benefits of GiveBig Extend Year-Round

Beyond the donor participation and funds raised, both Wirgau and Oliver note that GiveBig brings many other benefits to both the foundations and their local nonprofit partners. The most obvious is that nonprofits can continue to use Click & Pledge year-round, eliminating the necessity to have one payment-processing system for regular donations and another for the 24-hour giving day.

“What’s great about GiveBig is it multiplies gifts of any size. It allows folks who are passionate about a particular cause to contribute and feel like they’re part of something bigger. Their $10 donation goes a really long way.” — Carly Oliver

“What’s great about GiveBig is that it’s part of this greater set of tools from Click & Pledge,” explains Wirgau. Even nonprofits without a website can create an online presence through GiveBig, leaving their page up year-round and continuing to collect donations through it. In the absence of their own website, the GiveBig page serves as a place where donors can find these nonprofits.

“GiveBig is a great example of the kind of a role that a community foundation can play: to bring resources for nonprofits to raise funds that they couldn’t do alone.”