Last month I convinced myself that a robot would steal my job within the next two decades. And that idea, somewhat ironically, came from a book.

Enter The Inevitable: Understanding the 12 Technological Forces That Will Shape Our Future, by founding Wired Magazine editor Kevin Kelly.

The Inevitable is, intrinsically, a pretty daunting title. We always use unpleasant events to refer to “The Inevitable”: deaths, taxes, family reunions, and the like.

But Kelly’s envisioned a fairly optimistic inevitable future; a scenario where current technological trends (screening, sharing, remixing, and tracking, to name a few) will reshape our day-to-day. Among other seemingly radical ideas, here’s a sampling of Kelly’s inevitable predictions:

Does that seem crazy to you? It does to me, too. Technocratic jingoism can’t inherently foster social change. It takes early adopters, entrepreneurial spirit, social acceptance.

But what happens when acceptance permeates a culture? It’s no longer technocratic. In fact, if you were alive in the early 20th Century, you might call it progressivism.

This isn’t even a new idea. Even Mozart was quoted, “I really do not aim at any originality.” And that was the 18th Century, which makes Rock Me Amadeusseem completely derivative now.

Was Vine inherently original? Not really. Add sound to a .GIF and boom: roasted. But did it revolutionize how we share cat videos? Completely.

So where’s the tipping point, exactly? For the sake of posterity, October 2016 could have been a needle-sized lynchpin in the proverbial Earth-sized grenade.

Crowdfunding is here to stay for awhile, and that’s no big secret. Forbes reported last year that from 2010–2015, crowdfunded donations increased from $880 million to $16 billion.

That’s over a 1700% increase. Regardless of the numbers themselves, there’s a whole lot of social currency riding on crowdfunding. It’s an incredible way to reach thousands, even millions of donors who may not have heard of you or your organization before. All you need is a good story and a couple of friends.

But like any marketing or fundraising channel, crowdfunding needs to be taken with a grain of salt. With Connect 2.0, we’re taking the first steps into a fundraising revolution, opening up new windows and avenues for nonprofits to generate revenue.

But tried-and-true methods like direct mail, traditional website donations, or even text-to-give functionality, will play a significant role in any nonprofit’s fundraising mix — especially at the end of the year, when these options are still the most effective fundraising tools on average.

If you’re not already incorporating these strategies alongside your crowdfunding efforts, or vice-versa, now’s the best time to do so. It pays to spread out your organization’s efforts, not just count on one platform as a one-size-fits-all solution.

For privacy reasons Vimeo needs your permission to be loaded. For more details, please see our Privacy Statement.
I Accept

Because we have the only credit card reader integrated with Salesforce®, we wanted to take that to the next level. Alongside the Connect 2.0 improvements, we made some big updates to our partner app for the Swiper1 credit card reader.

You’ll now be able to include your Salesforce® account’s box office data in the Swiper1 app. So now you can take tickets and register event attendees right at the door, or wherever you are.

You can download the improved Swiper1 app on the App Store or Google Play. Also, it works even better if you have the Swiper1 itself. 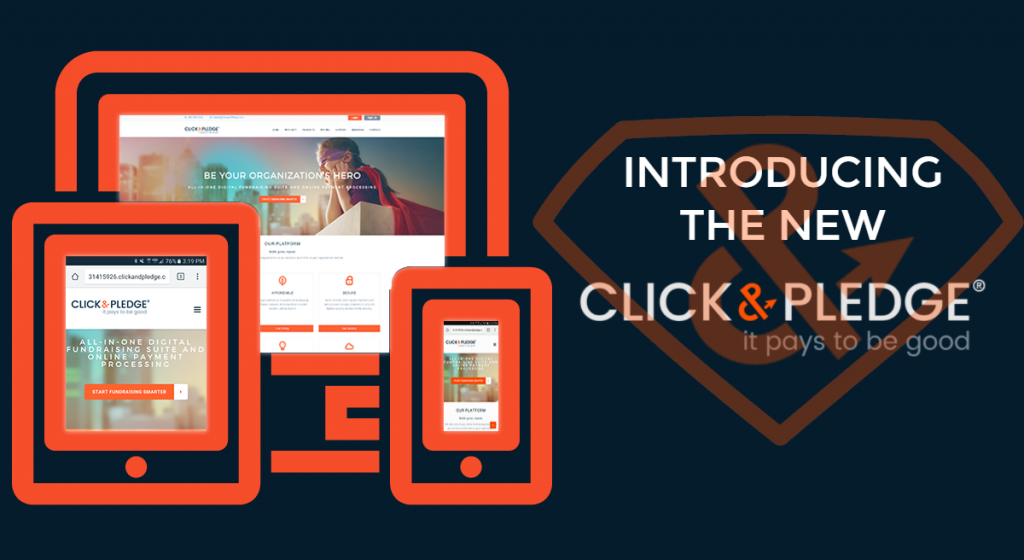 Among other changes, you may have noticed our website got a little sleeker. And our ampersand got a little punnier. And is that a new orange??

Yes; it did. And it is a new orange, thanks for noticing! This is a new direction for our company. Just as the face of the Web changes, we’re welcoming a brand new day — no pun intended.

We’re still the same “Click & Pledge Next Door” who you always knew. We’re still here to help you and your cause to the best of our abilities… we’ll just look prettier while doing so.

By letting children with chronic and life-threatening illnesses pick and choose the materials and patterns of their hospital gowns, the nonprofit founded by Jessica Kidd is a great example of what can be done with repurposed materials.

2) Paypal: ‘Even the big guys can fundamentally screw this stuff up’

The September cyberattack on Yahoo ushered in a reactionary new era of online protection. But hasty responses to immediate matters often aren’t perfect solutions — even worse, they might create loopholes.

At least, that’s what Henry Goddard figured out in late October. Using a proxy in a cellphone dead zone, Goddard bypassed Paypal’s two-factor identification by altering his outgoing data to answer his account’s secret questions authentication.

Text-messaging as 2FA is clunky, for reasons stated above. Instead of relying solely on SMS for security purposes, we use Authy’s OneTouch feature to push notifications on previously authorized devices. Just register the same email you’ve used with Click & Pledge with your Authy acccount, and you’re on your way (More details on how to login with Authy are included in our Help desk, too.) So if you have an Internet connection to use Connect, you’ll definitely also have the connection to run Authy’s 2FA, which removes the hassle of Paypal’s bug from the process.

How this plays out for PayPal in the long-run is another question that remains unanswered. While two-factor identification is gradually gaining steam amidst a new wave of cybersecurity and consumer uncertainty, it also introduces a whole new batch of system requirements outside traditional login processes. Paypal and its users must be thanking their lucky stars this bug wasn’t discovered by a malevolent user.

If transparency is the name of the game, then President-elect Donald Trump might have thought we were all still playing “Guess Who.”

The news that broke early last month regarding the Trump Foundation is a reminder that this could happen to any nonprofit, not just a major political candidate.

So, what did we learn here, anyway? Color inside the lines. An ounce of certification is worth more than a pound of investigation.