3 Surprising Facts To Save Your Giving Tuesday Social Media Plan

#GivingTuesday is, inherently, a social media powerhouse. After all, there is a hashtag in its name. Within a week’s span, Giving Tuesday received over 1 million social mentions. Those were viewed 21.7 billion times around the globe.

According to the 2018 Global Trends Giving Report, social media is the No. 1 communication tool that inspires donors to give. But that doesn’t mean you should just start posting willy-nilly. Instead of crossing your fingers for more retweets this Giving Tuesday, keep in mind these three findings to guide your social media plan.

We’re not talking about Beyoncé, here. However, recent findings from researchers at Washington University in St. Louis show that people use their gut instinct to donate to charities rescuing more “beautiful” animals, rather than less beautiful animals that are highly endangered.

The researchers said these studies exposed a negative correlation between beauty and neediness. That means the ones who need the charity most are often not the ones to receive it. In turn, organizations with less “beautiful” causes are the ones more likely to receive diminishing returns from their fundraising efforts. So, eye-grabbing aesthetics are of utmost importance when communicating your organization’s mission.

It’s also true the research indicates that participants chose the less beautiful subjects when they were given more time to process their decision. But, again, this is social media; it’s a pretty impulsive space, folks. Most donations inspired by social media are less than $1,000, and one-third are less than $100. In terms of purchase decision-making, social media donors usually require very little information research to make their choice.

We’ve talked about “slacktivism” before — small-scale societal contributions — and it often gets a bad reputation. Instead of lumping all slacktivist activities into one category, some slacktivist social media activities are more impactful than others.

Just because your post doesn’t receive likes or comments doesn’t mean that it’s less effective. It’s more important to go beyond the vanity metrics and review whether your social media posts inspired viewers to take action.

While Giving Tuesday donors are less likely to become further involved or make recurring donations, there’s still more value to these participants than those who solely pad your vanity metrics.

Most people habitually use social media; whether they’re waiting in line or bored at work, they log into Facebook and scroll through their feed without giving it a second though. Most smartphone owners check their notifications within 15 minutes of waking up. We dug into our own analytics at Click & Pledge to find that Giving Tuesday is no exception.

The graph below shows that, through the Click & Pledge platform, most Giving Tuesday donations occur between 10 a.m. and 3 p.m. — a few hours bordering lunchtime. But, if you look further, you’ll notice that gifts are a constant throughout the regular work day. 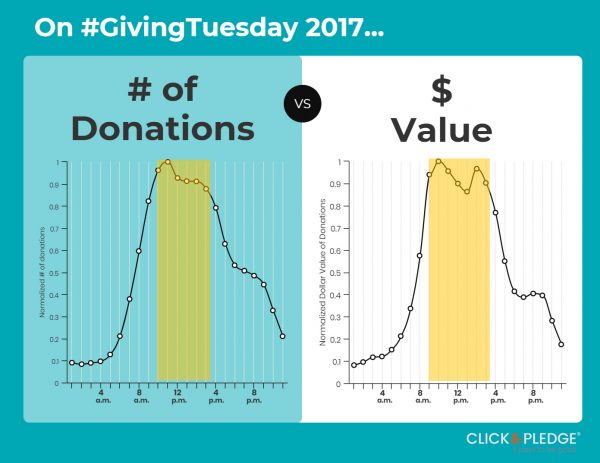 Some people say they don’t check their social media accounts during work. Those people are either lying, or they are incredibly productive. Kudos to the latter. On any given day, it’s important to keep your social presence up. But that’s even more important on Giving Tuesday, when your organization will need to post throughout the day to maintain visibility.